The Google Pixelbook 12in is a small chromium-based laptop. First released in 2017 with the Pixel 2 series, the Pixelbook has been in the market for a while now.

If you’re one of those people who don’t want to carry a big, bulky laptop everywhere you go, you definitely take a look at the Google Pixelbook 12in.

Some people think that the only way out of their computing problems such as sending emails is an expensive, bulky laptop. How about we tell you about a small, convenient laptop that doesn’t cost too much and doesn’t weigh a lot?

YES, a Pixelbook is what you’re looking for. The Google Pixelbook is small, costs less, and gets the job done faster.

The Google Pixelbook was first released in 2017 along with the Pixel 2 series. The Pixelbook was supposed to replace the Chromebook by adding new features to the laptop.

According to tech reviewers on YouTube, the first Pixelbook was not worthy of replacing a Chromebook. However, it did have some additional features but the reviewers suggested that the buyer wait.

The Pixelbook, at $1000 is loaded with high-end hardware components. Here’s a look at what’s inside the Google Pixelbook.

The Pixelbook has a fast i5 7th gen CPU. What’s great about this processor is that it consumes less power which is great for the Pixelbook. If you think an i5 7th Gen CPU is too much, there’s another version – a version with an i7 CPU and double the RAM with 512 GB nVME SSD Storage.

When the Pixelbook came out in 2017, 8GB RAM for a Chrome OS laptop was supposed to be overkill. Well, not anymore. Now that the software has improved a lot, 8GB RAM is now a compliment. The base model comes with 8GB RAM. You can also get a version with 16 GB of RAM.

Does it really need nVME SSD storage? Yes! Considering how thin the Pixelbook is, the most suitable option would’ve been an nVME storage device. Google made sure that every component was up to the mark when it comes to performance. Even in 2022, an nVME storage won’t slow down.

If we were to talk about the design and hardware, the first Pixelbook 12in had a good metallic design with a premium body. The laptop is thin and sleek from every side.

The Pixelbook takes after the Pixel smartphone with the glass window up top. Having a full metallic body, it has a very boxy design. Its super thin design makes it look more like a thick tablet than a thin laptop. (makes sense?)

The Pixelbook has a 12 Inch sharp display with a 4:3 aspect ratio. Of course, the display is touchscreen and has a resolution of 2400 x 1600 Pixels. (Now that is really sharp for a 12-inch display).

When you look at the Pixelbook, the first thing you notice is those big bezels (like the Pixel 2). Some reviewers say that it’s a good thing.

As we need to “hold” the display to use the touchscreen, the bezels come in handy. On the other hand, some would say that the bezel makes the Pixelbook look ugly.

With a minimalistic design, we’d say the keyboard is one of the most sought-after aspects of the Pixelbook. The keys are clicky, feel nice, and probably will last long. And hey! The keys are backlit.

On the keyboard, you’ll find the Google Assistant dedicated key – Google is pushing hard with their AI Assistant – for your convenience.

The Pixelbook has a 7.7V 41.41 Wh battery. On the Google Official website, they claim that it can last up to 10 hours of usage. (Do keep in mind that battery life depends on a lot of factors such as battery health, temps, and tasks being performed)

The Pixelbook comes with 2 x USB Type-C Ports – one on either side. Both USB ports can be used for charging – so you have that convenience too. On the left side, you’ll find the 3.5mm headphone jack. That’s it. 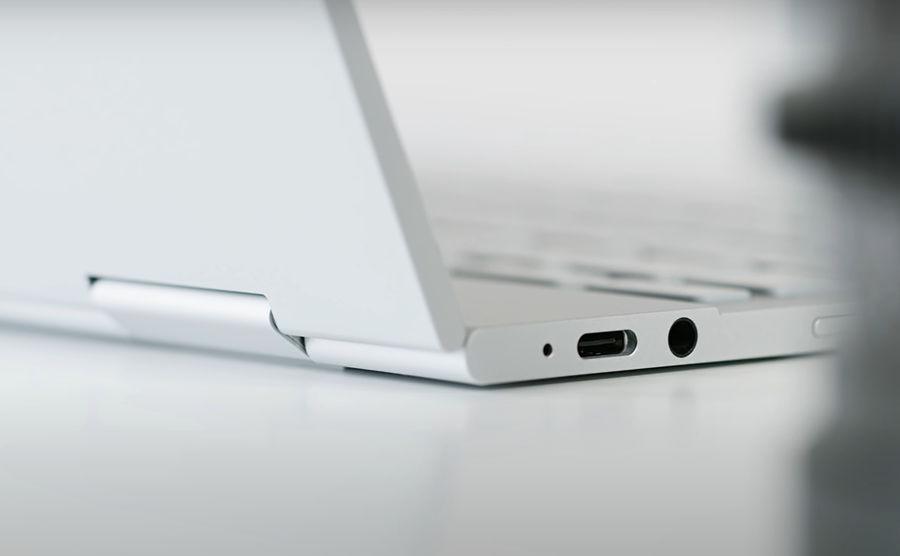 So, at the end of the day, it’s subjective. It’s you who decides if you’d let the bezels slide.

Since the first release in 2017, Google hasn’t released another one (except for the Pixelbook Go). Instead, they’ve been improving the software by having frequent updates. Fast forward to 2021, Google has been updating the software of Pixelbook and it has improved A LOT!

The same buggy Pixelbook that no one liked is getting everyone’s attention.

When Google released the Pixelbook, the laptop was extremely buggy. Some experts said that Google made a mistake, the software in the Pixelbook is not ready to be used.

The processor (i5 – 7Y57) paired with 8 GB of Ram was supposed to give you seamless performance but it just failed. Let’s talk about what aspects of the Google Pixelbook were buggy in 2017.

Buggy Software – The software at that time was so buggy that some tech reviewers called it “not ready to use”. Android OS and Chrome OS integration was just starting out at that time. In short, the Android apps weren’t ready to be compatible with Chrome OS which caused the apps to crash. Also, the apps couldn’t scale properly to the Pixelbook’s screen.

Linux (not so good) – You had the option to install Linux into the PixelBook but there wasn’t any point. Unlike traditional laptops, installing Linux on the Pixelbook was quite a task.

Fast forward to 2022, a lot of Pixelbook users are claiming that the laptop has gotten better than ever. Also, its price has also come down making it a good deal if you’re looking for a lite work machine. But, the question is:

Why Has Google PixelBook 12in Started Getting Attention in 2022?

Despite the fact the Pixelbook in 2017 got huge backlash from the community, Google has made a comeback by improving the laptop. Over the past 5 years, the Pixelbook has gotten a lot better than it was first released.

Android – Chrome OS Integration is Better Than Ever

The same Android – Chrome OS integration that caused tons of issues, is getting everyone’s attention because it’s gotten smoother than ever. Using android apps such as Docs, Zoom, and Slack is more convenient than ever.

Another reason Chrome OS is now famous is its combination of Desktop and Mobile OS. You can use desktop apps i.e., Chrome, along with Android apps on the same laptop. Let’s say you want to connect with your co-workers with a desktop app like Microsoft Teams, Chrome OS lets you do that.

Since Android apps are now completely supported by Pixelbook, you can play your favorite Android games on this laptop.

Since there is now a significant number of android and desktop apps available on the Google Pixelbook 12in, it has improved productivity a lot. Switching from one app to another is now smoother than ever. Android apps, as we know, come with a lot of productivity features. These functionalities along with a fast processor have proved to increase productivity.

Last but not least, the Chrome OS on the Pixelbook is now better than ever in 2022. The Animations are not smoother than before, and overall multitasking is now a great experience, not to mention the future updates that’ll keep improving the Chrome OS experience.

If you buy the Google Pixelbook 12in today (in 2022), you won’t believe that you’re using a 5-year-old product. The reason why is that the OS is now extremely smooth.

It’s Now Cheaper Than Ever

The Pixelbook was listed at a $1000 price. In 2017, you could get a high-end laptop for that price. In 2022, the Pixelbook has gotten cheaper (but not on Google Store, it’s still $1000) on eBay and other marketplaces. If you go to Amazon, you can find this bad boy at around $400 which is pretty good for a 7th Gen laptop.

To sum up all we’ve said about the Google Pixelbook in this article, we’d say that it is a good buy in 2022. With the specs, you get in that price range (~$400), it’s a steal. The Chrome OS will keep getting better and smoother which will increase your productivity – even when you don’t have access to your primary workplace. The Pixelbook is the go-to workplace that you can bring basically anywhere.